Damien Center, Damien Cares, and Walgreens will be closed on January 20, 2020 in observance of Martin Luther King Jr. Day. Normal hours to resume on January 21, 2020. 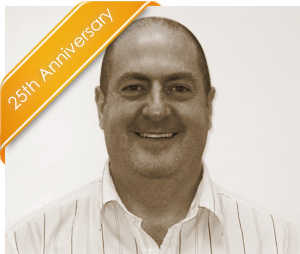 When Mark Lee, a young IU Hoosier with a painfully shy disposition, mustered up the courage to sneak into Bullwinkle’s one fateful evening in 1982, he had no idea his world would be turned upside down. Anxious about being carded and uncertain whether or where he belonged on the disco dance floor at one of Bloomington’s mainstay bars for the gay community, Mark turned to a publications rack for comfort and picked up the first thing he could find.

Skimming through an arbitrary publication, only half-focused on its contents, Mark’s eyes fell on an article about GRID (Gay-related immunodeficiency), a disease that would capture his attention for many years to come. Gay-related immunodeficiency, an early term for AIDS, was taking the gay community by storm, but fear was spreading just as quickly.

“No one knew where it was coming from,” Mark recalls. “They just knew that gay men in New York and San Francisco were dying of this horrible disease and that they were dying within six months of being diagnosed.”

For Mark, it was a wake-up call. Besides being his “first real experience in a gay bar or anything in the gay community,” Mark was drawn in by what he could do to keep himself safe in the midst of a national crisis. “I did a lot of reading,” he says. “I read everything I could on it: signs you might be positive, how to take care of yourself, anything.”

According to Mark, he came out just as the gay community was making a major shift. On the one hand, an era of promiscuity, bath houses, and anonymous sex was ending, while AIDS was only just beginning. “People started dying,” Mark says, “and then people started taking notice and taking care of themselves.”

Despite the initial fear and uncertainty, in the 30 years since Mark’s first foray into Bullwinkle’s, he’s become an advocate and activist for HIV/AIDS in too many ways to count. He was one of The Damien Center’s original “buddies,” a role in which he was paired up with HIV+ individuals to build friendships and develop a support system. More on that later. He also went on to work for Indiana Community AIDS Action Network and AIDServe Indiana and continues to support The Damien Center today. Though Bullwinkle’s closed its doors in 2006, the significance of Mark’s work in fighting HIV/AIDS and supporting those affected by it lives on.